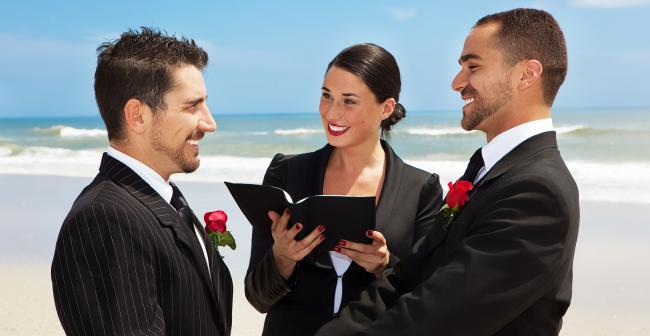 Planning a Gay or Same Sex wedding is not that different to a traditional wedding but there are some details that differ.

As there is no ‘etiquette’ for gay weddings the couple is free to make it up as they go. There are no rules to break so they can, in fact, be part of establishing what will become gay wedding etiquette.

The first difference with gay weddings is the proposal. As gay weddings are so ‘new’ it has been found that, to date, the majority of couples have been in long-term relationships. Rather than a formal proposal, it has tended to be a mutual decision- many have discussed the idea, if and when marriage became legal. Undoubtedly it will change over time, once gay weddings become the norm.

It has been found in the first 12 months of legal gay weddings in the USA less than half the couples approached their partners family for permission to marry. This too, we believe, will increase over time.

In the past, these have been separate events. They can certainly be separate events, however, it seems that it is more common to have a combined event. The guests that would be invited for each partner are generally the same!

The area where a gay wedding will differ the most is in the actual wedding ceremony.

A traditional wedding would see the bride accompanied down the aisle by her father whilst the groom and bridal party waited at the altar. There are various options open to gay couples. We have suggested a few below.

1) The most popular option to date (approx 37% of weddings in the USA) is where the couple walks down the aisle together.

2) The couple may approach the altar via different ailes and meet at the alter. This could be done by themselves or accompanied by their father or mother.

3) The couple could enter from the side with the officiant.

4) The couple could be seated with their parents or friends and then join the officiant when they arrive.

5) The wedding party can be any combination of family & friends you wish. Each partner could invite half the party or they could choose the party together.

As you are making the rules- choose whatever feels right for you.

Common marriage tradition is that partners do not see each other in their wedding attire until they meet at the church. This is certainly losing favour but many still follow the practice. If you wish to follow this tradition we would suggest that you get a friend to coordinate attire to ensure you do not clash.

Enjoy this opportunity to style the wedding as you wish. You are fortunate that many of the decisions are not constricted by tradition.